In April 2017 the U.S. Federation was awarded the rights to for our Men's National Team for the purpose of competing in the 2017 World Games in Wroclaw, Poland.  Other competing nations in our sport were Poland, France, and Germany.

The U.S. Federation looks forward to the opportunity to form our Men's National Team again and we're actively and eagerly searching for opportunities.

Interested in Playing for our Men's National Team Program? 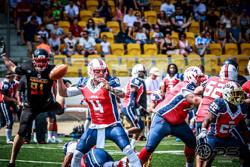 For serious competitive athletes with collegiate experience and a deep desire to compete at a very high level, our Men's National Team Program will be the right place for you.  We take a serious approach to selecting the best football athletes available and demand the highest degree of dedication to the program.

You will enjoy making great friendships with your new teammate, those athletes and coaches on the opposite team, and experience cultural exchanges with host nations.

For those interested in pursuing international player contracts with professional and club teams in Europe, this is the very best way to give those coaches an opportunity to evaluate you live and on the playing field.

It all starts with your registration as an Athlete for the U.S. Federation of American Football.  During this registration process, you may indicate whether you want to be considered for the USFAF Men's National Team, the USA Eagles Club Team or both! 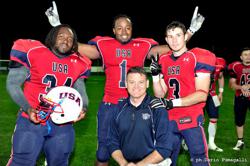 If you have what it takes to lead and oversee the development of our athletes as they prepare for tough international competition, then we want to talk with you.

The non-negotiable attributes of a coach of the  with any of the USFAF competitive programs:

Integrity:
You have to demonstrate honest, selfless determination toward our goal, display servant-leadership, and respect for our athletes and fellow coaches and staff.

Be Organized:
Our program teams have a very short period of time in which to prepare for very competitive and determined opponents.  You'll be required to have great organizational skills in order to effectively utilize your time and to get the very best of our athletes.

Have a Plan:
Whether a position assistant or a coordinator, you'll need to be prepared to execute a plan to get the best of our athletes and prepare them for the challenge ahead.

Motivated by Work Ethic:
Your work-ethic should keep you poised to keep you composed and in control.  You're ready to outwork everyone and put long hours into the grind of preparation.

Outstanding Teacher:
There's a lot to teach in a very short period of time.  You will be required to have an effective plan to pass experience and knowledge to our athletes.

A Communicator:
The ability to communicate difficult concepts and ideas is an indispensable attribute of every coach on our staff.

Demanding:
Hold our athletes to a high standard of excellence on and off the field.  Lead by true example.

Be a Leader:
Your leadership abilities will be important to the entire team  Meet those non-negotiable attributes above and you can join us in leading the U.S. Men's National Team.

The U.S. Federation Men's National Team has accepted an invitation from the new European League of Football and its Commissioner, Mr. Patrick Esume, to compete in Berlin, Germany on October 3, 2021.

The European League of Football is a professional American football league, that is the first fully professional league in Europe since the demise of NFL Europe, in 2007.  The league consists of 8 teams located in Germany, Poland, and Spain, with plans to expand to at least 20 teams in future years.  The CEO of the League is Mr. Zeljko Karajica who is also the Managing Director of ProSiebenSat .1 Sports Media Network who will be providing a live television broadcast of the event across Germany and Europe.

The game is scheduled to be played at Friedrich Ludwig Jahn Sportpark which has a spectator capacity of about 20,000.

If an athlete is interested in applying for the team and has not completed the USFAF Athlete's Questionnaire Form, please go to https://usfaf.sportngin.com/register/form/121674476 to complete it.

Details and costs to participate will be sent to you.

After holding the heart of our defensive unit in his hands the past ten years, Gunz will step into the leadership role of our team as our Defensive Coordinator and will also coach linebackers. No individual has a better grasp of our defensive philosophy than Gunz and I'm confident he will make an immediate impact on how our defensive unit performs.

Please reach out to Gunz and congratulate him on this position.

The U.S. Federation of American Football has been named the United States Representative to the World Games 2017 to be hosted in Wroclaw, Poland in July.

The U.S. Federation National Team will play Germany's National Team on July 22 at Olympic Stadium - Wroclaw. Poland and France will play that same day with the winners of the two games meeting for the World Games Championship the evening of July 24.

We’ve all heard about “The Process” as it relates to Alabama head coach Nick Saban and his program.

When most hear the term, they immediately picture Saban on the practice field, voice raised, intensity in his eyes and coaching his rear off.

But in digging into exactly what “The Process” is, one finds that it goes well beyond football. It’s actually a life philosophy rooted in sound psychological advice. It’s something that can be life-changing if adhered to properly, regardless of profession or situation.

Here are five life lessons we can all use from Saban’s process.

As human beings, the most intelligent organisms on the planet, we tend to think deeply both about past and future. At times, if one is stuck in the past or overly-concerned about what lies ahead, it can be paralyzing in terms of important progress to be made today. We can’t do anything about yesterday and we aren’t guaranteed tomorrow. Focus on today because that’s really all you’ve got.

We all have thoughts that come and go on a daily basis that aren’t necessarily related to the task at hand. This “clutter” can cause an internal train wreck in our minds and quite often can derail the best intentions of a single day. Get rid of the clutter. Block it out no matter what you have to do to do it. Ask yourself - “is this something that is relevant to what I have to do right now?” and if the answer is no, get it out of your head. Far too often, we get consumed with irrelevant thoughts.

3- Do not be attached to outcomes

This is at the core of The Process. The story is that when Saban was coaching at Michigan State, prior to the Spartans heading to Columbus to face No. 1 Ohio State, he instructed his team to simply focus on the next play like it was a game within itself and not worry about winning. The result? Michigan State upset the Buckeyes, 28-24, in one of the signature wins of Saban’s early career. It’s great to have goals, but in order to reach those goals, one has to put supreme focus on what it takes to achieve those goals, otherwise you will never get there.

4- Adversity is your friend

Saban has quoted the first like of the book The Road Less Traveled by M. Scott Peck. The quote simply reads “Life is difficult”. That’s true. There won’t be a person on this Earth that does not face some sort of adversity along the path of life. While having to overcome adversity isn’t all that pleasant at times, Saban says that the achievements in the face of adversity are what makes achievements even more worthwhile.

5- Mental toughness and discipline are paramount

To face the certain adversity in life, one must have mental toughness to push forward and be able to block out the clutter, focus on today, etc. They also must have the discipline to handle the day’s business, which won’t always be the comfortable decision. Saban remarked in a speech once that most people have something every day that they don’t want to do, but they know they should, so they do it (or the opposite). Likewise most people have something every day that they know they should not do and they choose not to (or the opposite). It’s these daily choices that are influenced by our discipline and mental toughness in terms of having the strength to make the right ones.

It’s quite interesting that Saban’s success as a head coach has really come down to a life philosophy. Regardless of anyone’s opinion of the Alabama football program, Saban or anything else that rabid fans of other teams love to hate on, this type of advise is good for all of us to follow if we want to be successful. I know I picked up a lot of useful information in studying up on it and would encourage you to do the same.

Anti-Doping Rules to apply to all USFAF sanctioned events

The U.S. Federation of American Football is proud to stand by IFAF in the adoption of a strict standard related to anti-doping and keeping our sport, and our athletes, clean of banned substances.

Interested in becoming a sponsor of MEN'S NATIONAL TEAM?

Fuel To Power Through

Want to participate in your local community? Become a  sponsor for U.S. Federation of American Football and support youth in your area.

Want to participate in your local community? Become a  sponsor for U.S. Federation of American Football and support youth in your area.